02 Dec A letter from Cameron Crowe to Gene Kearney

As has been proven on this site numerous times, I like collecting things, especially those regarding the work of Cameron Crowe. I’ve had this latest item for the past two months, but due to my little sisters worsening illness and recent passing, haven’t had time to share it with the land of on the internet.

So long as this is real – and my semi-expert eye cannot spot anything that doesn’t look or seem illegitimate about this item – below is a letter that Cameron Crowe sent to Gene Kearney, who served as key grip on his directorial debut “Say Anything”. It’s a first for me, owning an item thats deemed more personal than memorabilia and I hope Mr Crowe doesn’t mind the fact that I now own this; I like to think that I saved it from the bin! Here’s the image, there’s more detail below. 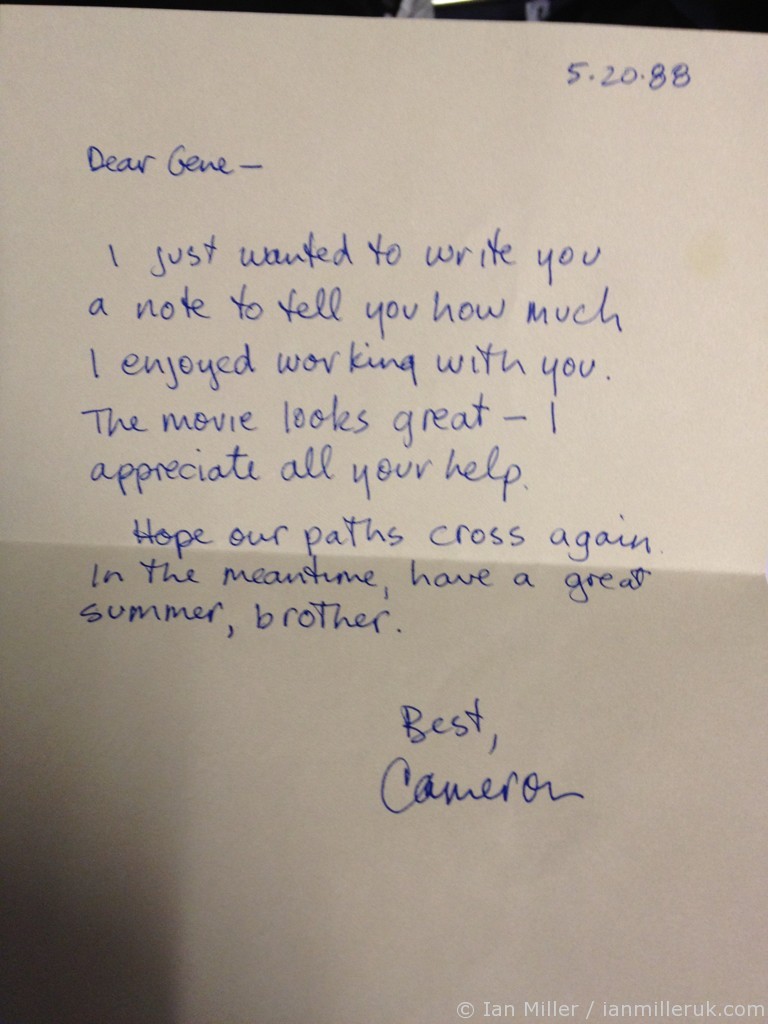 You can read more about the achievements Gene made in the industry whilst he graced our World by clicking onto his IMDB page (click here). Darn he worked on a lot of movies I loved; LA Story, Mr Hollands Opus, Ghostbusters (I and II), Flatliners, Indiana Jones & The Last Crusade, ET, Rocky and of course, Say Anything. I know little other else, but he was clearly a great talent and I bet he had a book of great stories to share about his life’s work. Sadly he passed in 1999 and that’s the roundabout way in which I found this item, part of a lot of letters in his personal storage box. That’s why I’m 99% certain that this is a very real letter, that and the thought that Cameron knows and thanks every member of the teams that he works with, sounds just like the man I picture and have been told about from those whom I’ve met that have had the privilege of working at his side.

Cameron, if you see this – of course, I’ll be tweeting you the link like the annoying British twit that I am – I hope it brings happy memories of making the film.