I’m going to start re-publishing old articles and q&a’s that I’ve previously had published online and in the press. This first post is a biographical style piece that was commissioned and published as the cover article by Play – the instore magazine of (the now defunct) Sound Control music chain. Hence some of the discussion focusses on tech gear.

I met with Will and Kai of the Mystery Jets towards the end of the hugely busy year of touring which saw them on the 2006 NME tour alongside The Arctic Monkeys and also saw the release of their debut record “Making Dens”. From memory we walked around Camden for half hour before settling in a shisha bar in Stables Market, Camden. I have strong memories of Kai beaming about the brilliance of Billy Bragg’s “New England” and hoping that one day they too may write a song as beautiful and poetic. I recall that primarily because a few months down the line they released “Young Love” a song which instantly struck me as potentially being just that. 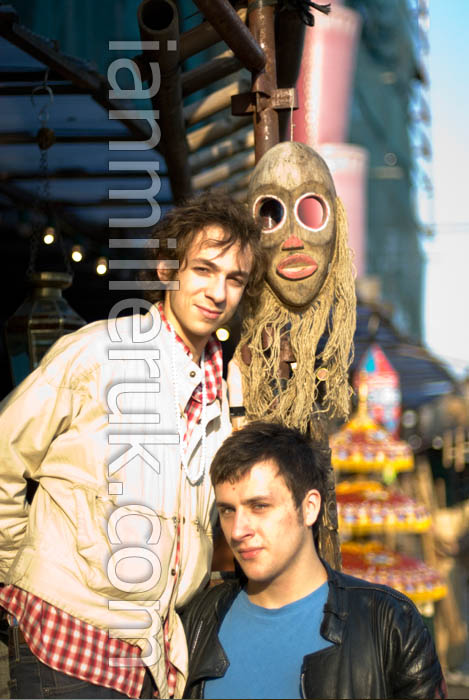 “I met Blaine in nursery school when I was about four. I used to hang around his house, he’d come round mine, his dad was always around and playing records by bands like The Doors and Pink Floyd, and that’s how we got into music.”. Guitarist William Rees responds to the age old interview ice breaker question, ‘How did you all meet?’, in a fashion that certainly bucks from the typical tired statement that usually starts, ‘Well, we all met and got chatting in this pub one night…’.

Now aged twenty-one, Will and bassist Kai Fish form two parts of popular new band The Mystery Jets. Having spent the past year touring virtually non-stop, the band recently released their debut long player “Making Dens”, a record that was lapped up by their now swelling fanbase and critics alike. Rewarded with the opening slot on the NME awards tour – an infamous stage billing due in part to the tours previous openers that have included Coldplay, Kaiser Chiefs and Franz Ferdinand – and a primetime appearance on Top Of the Pops, you may be mistaken for thinking that they’re an overnight sensation who’re caught in the middle of a whirlwind. Far from it, with that striking opening remark the image of this band barely out of diapers, toddling round a room taking in “Dark Side of the Moon” whilst father Henry lights a candle should be firmly lodged in your head. Here’s a group who were quite literally born to be together and have spent their entire childhood developing a mature appreciation of music that’s far beyond their years. Fame is the last thing on their mind. 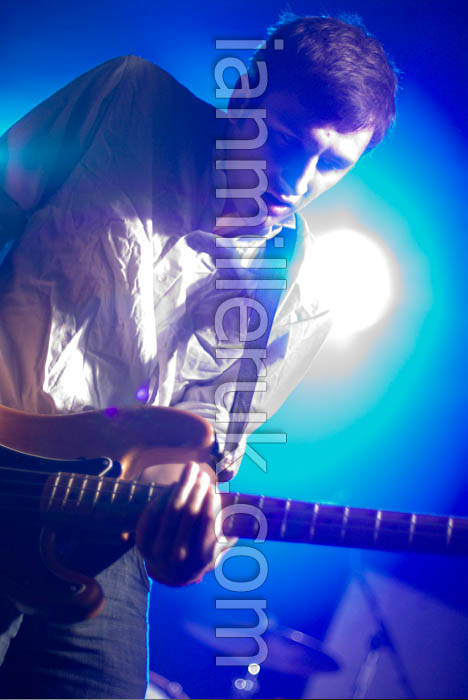 It’s strange discussing this band’s history. The evolution of the Mystery Jets seems so organic that you soon realise that there was never any form of a grand scheme. Will points out, “When it was just me, Blaine and Henry, we were young, it was just a very innocent thing for us to do and it completely separated us from other kids at school because we weren’t playing football or causing havoc, we were just playing music.” It wasn’t until they met Kai that things started to become more ambitious. Even then there was still this feeling of familiarity within the band. Kai is quick to point out how his parents lived with Blaine’s in the 70s and that they knew each other when they were young. After several years of separation, they were re-introduced to each other at secondary school, at which point the three lads learnt the ‘Ways of the World’. Kai explains, “We all got together at weekends, went to Camden and smoked, got ripped off by drug dealers and snogged our first girls – all that kind of essential 14/15 year old ‘Us Against The World’ stuff.”

With Kai being firmly rooted in the upbringing of this now extended family, they set about finding a drummer for their band. They met drummer Kapil Triveldi, or ‘Kaps’ as they call him, “mysteriously on the internet”. Being the only member of the group to be introduced from outside of the Harrison family’s social circle, his different life experiences, influences and natural talent on the kit seemed to bring the essential ingredient they needed to go forward. Will comments, “The thing about Kaps is that he’s the most different to all of us. He listened more to urban music when he was brought up and has a different way of thinking to the rest of us. The more I think about it, the more I think that’s the key to the way we sound, the different personalities all get torn into it.” Kai continues, “There’s a different kind of energy to urban music, there’s something more immediate there, you know?? The second you hear a hip hop drum beat, that’s it, it’s in your head, which is a lot more than punk stuff, which doesn’t have so much of a groove. Hip hop, it’s almost got a melody to the rhythm. I think that’s something we really enjoyed, starting out with just a drumbeat that Kaps would play.”

By the time the band are leaving school they’ve already spent time playing virtually any toilet venue they could get their hands on – they’d been on their own self booked summer tour and were quickly putting managers in place. Will felt everything was in order for them to be able to put their full energies into their passion, but as we all discover this is one of those pivotal moments in life when the realities of the real World start to set in. So why did Will think that the Mystery Jets could and should make the move into a being a full time band? I sense that there wasn’t an issue with lack of financial support for them, but that ultimately there was a belief that at this junction in their lives the only thing they had and actually did stand to lose by going out and getting a normal job, was the band itself, “It is different for everyone. There are people who’re at school and want to do music, but they haven’t found the right people to do it with yet. So if you leave school like that and have to start looking [for people] – that’s really hard. The beauty of music is finding people you love and making it with them, that’s how the best music comes out I think. With us, we’ve always had this really strong relationship in place, so we knew whatever happened money wise, we’d still have each other as mates.”

After a couple of years of constant touring and earning their dues, the band is now in a position where they can take instrument technicians on the road with them. Having a tech is the dream of many a performing musician, “They open your World actually,” beams Will, “It means that half your brain is no longer pre-occupied with the settings on your amp, or whether your speaker’s going to blow.” Not only does this give the band extra time to focus on the performance, but also time to re-invest in developing their tastes in both old and new music. Both lads spend time obsessively discussing obscure recent discoveries such as the Animal Collection, Public Image Ltd, The Microphones and Billy Bragg’s “beautiful, non-political output”. Obviously open to any suggestion of new music and openly admitting that they’re constantly developing their approach to writing as a result, Kai returns to the subject of tech’s and how – in a similar fashion – they’re also continually learning about the importance of gear selection. “The tech’s have helped us all out. They’ve got an amazing knowledge of effects pedals and how it all sounds, they’ve lots of good ideas for us.” This obviously leads me onto the subject of what gear they actually use.

Will starts, “I’ve got this new Vox amp which I’ve only been using these last ten days. It has all these wicked tremolo and reverb settings, it makes your guitar sound like an antique. My guitar is a 1986, second hand Fender Jaguar. Through my old amp – a Fender DeVille – it used to give a horrible high nasty tone, I didn’t realise it could do anything until I plugged it into a Vox.” When it comes to pedals he’s eager to talk about his polyphonic octave generator, “You can take out all the pitch frequencies and make your guitar sound like a bass, or a harp at two octaves higher, or you can blend them together to get this beautiful organ-style sound. I’ve also got this Line 6 pedal, I’m not usually a big fan of theirs but their green delay pedal IS amazing.”

On the other hand, Kai found himself originally approaching his choice of bass practically, “For me it’s always been about having something that didn’t weigh me down too much. To me the performance of the gig is very important, so I’ve always liked my bass to have really small bodies and thin necks and for that I really like the Fender Aerodyne. But I found I was getting through so many of them, like I was eating them! So now I just use a solid 70s Precision, the sound is pretty unbeatable, it’s probably the sound that’s been on 90% of the best records ever made.”

Will summarises, “I think with instruments, as with music, you just find your way there, you just play and play, especially when you’re on tour.” 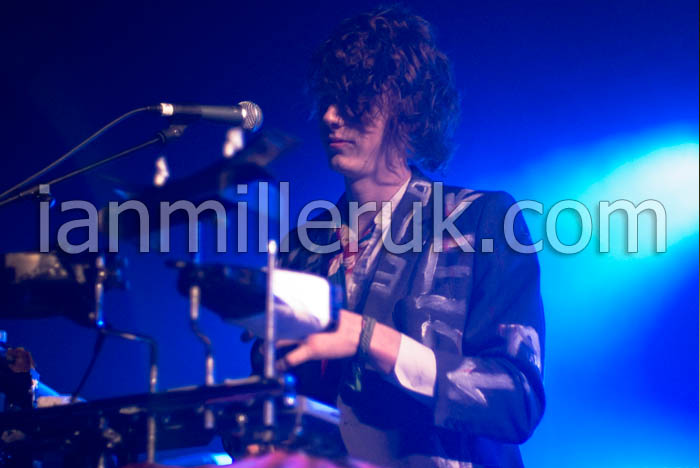 All you need is love

Some may say that the success afforded to the Mystery Jets so far has been merely down to luck and being in the right place at the right time – after all how many people end up doing so well with their high school band?

After spending time with them, I do feel that what makes them work so well is the simple notion of love. Their love of a wide range of music which in turn helped influence their extremely eclectic sound, love of each other, love of what they do and their love of playing instruments with other people – a factor which I’m certain played a part in the band’s elder statesman Henry decide to keep on with the Mystery Jets when many of his peers have long since resigned their guitars to a dusty loft in exchange for the life of a nine to five. To them this band is a lifestyle because it’s always been in their life

To them, playing music isn’t a profession. It’s something that should only ever be born from passion, “If you’ve got something you want to share lyrically or musically, just go and do it, no matter how big or small.” Kai’s words of wisdom continue through to Will’s closing statement, “Don’t do music for a living. Do music because you love music. And if you do stop, then you do stop and that’s no one’s choice but your own. Dive into it, the more you learn about yourself, the more you learn about music.”

The future for them, even by their own accounts, is unknown. They don’t perform or write to any rules, they’re fortunate enough to be able to do things on their own terms, constantly taking in everything around them, evolving their tastes and having total control not only over their music but the total package of how they and their music is presented to the public. The thing that’s clear to me is that whatever the Mystery Jets do come up with next, it will certainly be a grand, interesting and nurtured piece of modern music.